In the tale of Snow White, the Disney princess is taken in by the seven dwarfs. Each dwarf has its own personality and lives alongside Snow White in the woods.

Their characteristics reflect their names in the movies, but other than this, we don’t have much knowledge of where they came from.

Have you ever wondered who created the seven dwarfs?

Here are seven facts about the seven dwarfs that aren’t seen in the movies.

Although Doc is the leader, he is often the weakest.

Doc is seen as the father figure of the seven dwarfs as he is the oldest and wisest.

He is the one who organizes the group to get to work and makes most of the group decisions.

However, as seen through his stammer and habit of jumbling words, he isn’t always the strongest character.

When under pressure Doc will often have mild panic attacks and become so flustered he can’t think.

In one of the original versions of Snow White and The Seven Dwarfs, created in November 1935, Doc was not a character.

It wasn’t until later on when Doc’s character was established and paired with Grumpy.

The two go hand in hand, as Grumpy feeds Doc words when he is flustered and reluctantly looks up to Doc.

Happy is the dwarf that shows the most anger. 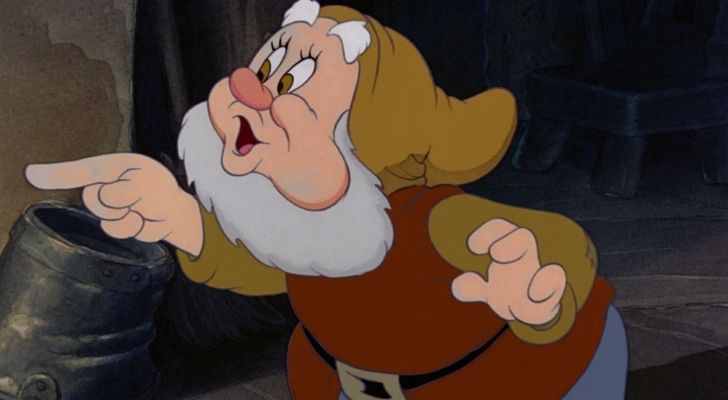 Although his name is Happy and his character is true to his name, he can sometimes get quite angry.

Like most characters, he shows natural emotions, but he is seen laughing, smiling, and being happy most of the time.

However, he can become fierce when danger arises for the group.

For example, in Snow White and The Seven Dwarfs, Happy is the first to jump to a plan when there is an intruder in their home.

His idea was to sneak up on the “monster” and kill it in its sleep.

Another example is when the Queen attacks Snow White, and Happy is enraged, with a face of anger ready to fight.

This demonstrates the fierce character that Happy is and his ability to experience other emotions than being happy all the time.

Albert Hurter inspired many scenes that focused on Sneezy. 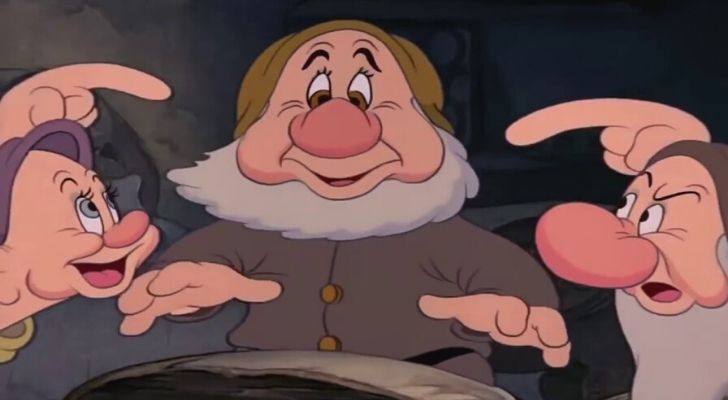 Although all seven dwarfs were featured in Snow White, certain dwarfs became more prominent than others.

Albert Hurter was the first inspirational sketch artist who worked at Walt Disney, and he was famous for working on Snow White and The Seven Dwarfs.

In particular, a rough sketch of a dwarf with his beard tied around his nose inspired the character of Sneezy and many scenes within the original film.

All dwarfs represented different emotions, so Sneezy was the first to represent an action.

Bashful is the romantic of the group. 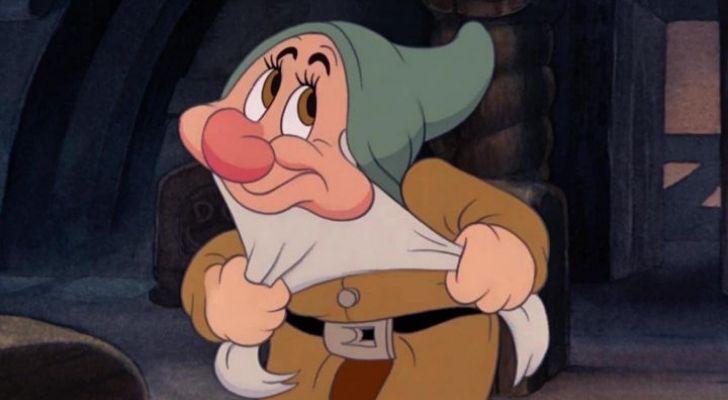 The seven dwarfs all portray different characteristics with key emotions, and only one shows an interest in romance.

Bashful is the only dwarf to show an appreciation for the more feminine things like flowers and romance stories.

When Snow White wants to tell a story, it is Bashful that requests a love story.

Bashful is known for his blushing cheeks, and this is enhanced when he develops a liking for Snow White.

Grumpy is scared of witches. 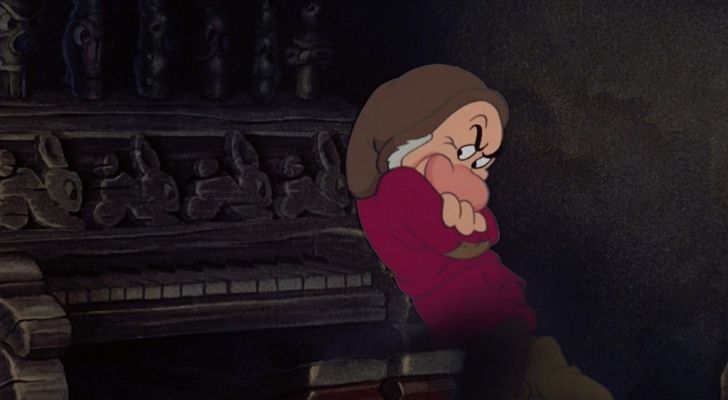 Grumpy is the gloomiest of the bunch, with his grouchy and moody personality.

This might make you think that because he is an angry dwarf, he has no fears.

However, Grumpy distrusts women, which is seen throughout the film Snow White and The Seven Dwarfs.

He has a strong opinion that every woman is a witch and is associated with black magic.

Grumpy most likely developed this association from hearing stories about the Evil Queen.

This is a fear of his that is highlighted in the movie but not explained.

Towards the end of the film, Grumpy’s paranoia towards witches changes as he realizes that Snow White is not evil.

Every drawing of Sleepy had at least one eye smaller to emphasize his drowsiness. 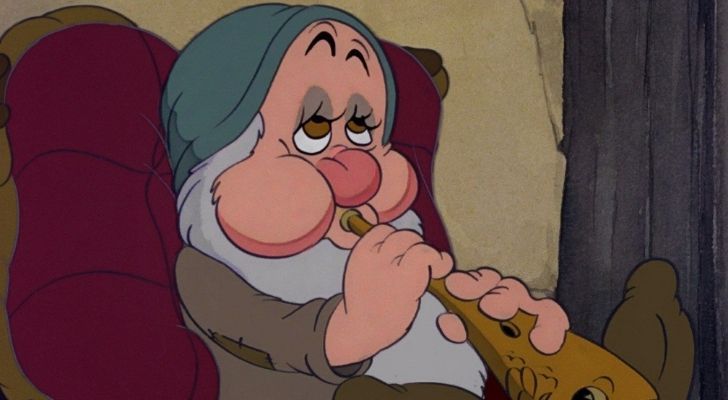 To portray the dwarfs accurately, character traits had to be emphasized.

Albert Hurter drew Sleepy with his mouth wide open as if he were yawning.

This inspired animator Fred Moore to be more extreme with animating Sleepy.

He made sure that every drawing, any scene that contains Sleepy, shows him as drowsy as possible.

Whenever he appears, Sleepy has at least one eye bigger than the other to emphasize his weariness as a character. 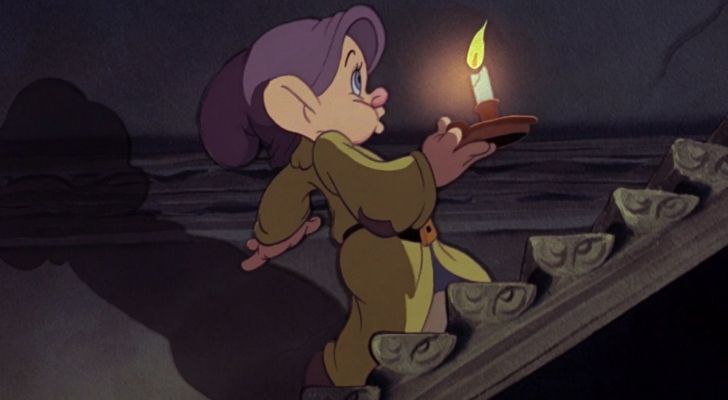 Dopey is the youngest of all the seven dwarfs. He is the only dwarf that doesn’t have a beard, has blue eyes, and does not speak.

Originally Dopey was a speaking dwarf, and Mel Blanc was hired as the voice of Dopey.

Mel Blanc was known for his voice acting, he was the voice of Bugs Bunny for 50 years, and he would have made the perfect voice for Dopey.

Then the producers decided that Dopey should be mute, so Blanc was no longer needed.

His character didn’t need a voice as his role was representational of a child or even a pet dog.

Although Dopey doesn’t talk, he makes vocal noises, whimpers, hiccups, and even tries to yell, but he has never tried talking.

Dopey’s failure to try talking leaves his ability to speak a mystery.

The seven dwarfs all have unique characteristics and personalities that reflect both their emotions and interests.

Over time their characters have been redesigned to suit updated versions, and alternative takes on Snow White, but the structure remains the same.

Each of the Dwarfs symbolizes an emotion, action, or state of mind, and this is shown through interactions with Snow White and each other.

This misfit bunch is some of the first Disney Characters to exist, and their purpose is still relevant in storytelling today.